Before coming to college Stephen Burns had worked a number of jobs including completing an apprenticeship in welding and while he was always in employment he never really felt like he had a career.

After becoming a father, Stephen found his priorities changed and the most important thing to him was making sure his son Luke had everything he needed.

“I became a Dad at quite a young age and it became apparent that there was things that Luke struggled with a bit more than other kids might. Just after he turned one, we were told that Luke was on the autistic spectrum. As you can imagine I was shocked. If I’m being honest I didn’t know too much about autism or what I could do to help my son so it was very frustrating.” 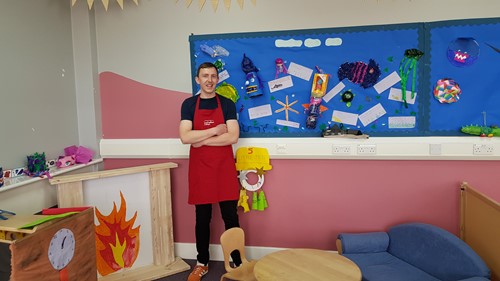 During this time Stephen and the family were in the process of moving house which caused its own problems.

“We were moving about quite a lot at the time and it was a bit disruptive to be honest. Because we were moving a lot, we were never really settled. Luke never had a health worker for over a year and I just felt that for his own development there wasn’t a lot there.

I thought about it and realised at the end of the day, I’m Luke’s Dad. If no one else is going to help my son, I am going to do everything I can to help him.”

27 year old Stephen had recently completed a Level 6 Sport and Fitness course at West Lothian College. He enjoyed the college experience and began to explore options to see if there was any way he could combine studying with helping his boy.

“Studying the sport and fitness course renewed my confidence in my abilities and I think ultimately gave me the confidence to explore my options.

The college experience was great for me, especially as a mature student. Sometimes when you are the oldest person in a class full of younger people it can be quite intimidating, but the amount of support available is fantastic.

I saw the HNC Childhood Practice course and it really opened my eyes to the vast amount of learning there is but it was definitely a challenge I was up for! I thought there must be people in the same position as me throughout West Lothian and beyond and if I could succeed not only would I help myself and my family, I could maybe provide a little inspiration to people.”

Stephen applied for the course with more than a little trepidation and was fully expecting to be in a class full of female school leavers as stereotypes would have him believe.

“I quickly realised that it wasn’t just girls straight out of school looking to gain a qualification. There was a mix in the class and a lot of people had the same reasons for studying as I did. It’s really motivating to be surrounded for people who are working together for a common goal. We were looking to find answers and help people. Nobody was in the class for financial gains. There was a shared goal of learning and being able to use the skills developed for the betterment of others and I can’t begin to tell you how motivating that is. There were no egos in the class. It was a case of everyone mucking in together and combining our skills to achieve a common goal. That was the case for both the HNC and HND. You go on a journey with these people and you want to see each other succeed.”

Stephen counts his placement as one of the highlights of his course as he received hands on work experience and got to put the theory into practice.

“One thing that really caught me by surprise was the amount of legislation and detail that goes into looking into children that must be adhered to. I think it’s one of those things that people may not take into account when they put their kids into childcare. I think that people sometimes have the attitude that ‘it’s looking after kids. What can be so hard about that?’ when in actual fact there is so much that goes on behind the scenes. The amount of knowledge and understanding required is phenomenal. Take in to account as well that everything in this job is ever evolving, there is always something new to learn, every day is a new day and the amount of on the job learning required cannot be understated. I think the way the college fit the placement into our timetable is really beneficial as it mixes the hands on learning we receive on placement with the classroom based stuff that we need to be a success in the workplace. The blend is done really well.”

As his HND is coming to an end Stephen has one eye on the future with a route that may differ from that which people may associate with a childhood practice course.

“I am planning on studying Children and Youth Studies with the University of Highlands and Islands via distance learning. This type of learning allows me to tailor my course to suit my needs. Luke has nurses in most days and through studying from home I can be there for him but still be studying. I would have never known about this opportunity but a lecturer on my course made me aware of the course. The majority of my class are going to study the BA in Childhood Practice but I feel this course offers me the option to study childhood practice or teaching or social work. I plan to move into social work as I feel not only can I help my own family, I could maybe make a difference to other families as well. Coming to college has changed my perceptions on so many things. It has made me realise that life isn’t over at 21 or when you have a kid. I think if someone had to live my life for a day, college would be the furthest thing from their mind but I am determined to take what I have learned and use it to not only help my own family but perhaps inspire someone else to take the chance to try and learn something new.

The biggest thing I have learned is that even if you are a male, you can make a huge difference in somebodies life, especially little boy’s lives. Too many times I have been on placement and have seen little boys who don’t have a male role model in their lives. I have seen the difference that can be made in a short space of time and it is so encouraging. The parents agree as well. So I guess the final thing I would say is Boys don’t be scared to give it a go. You might just find it is the most rewarding thing you will ever do!”