NC Mechanical Engineering student, Mark McGovern, is a 38-year-old married father of three who was looking for a change in career after spending most of his working life in retail.

“I had worked in various roles in retail ranging from sales assistant all the way through to manager. After leaving retail, I became a bus driver for a short while before deciding to take a chance and return to education.”

One of the main reasons Mark re-entered education was to improve his employability skills. 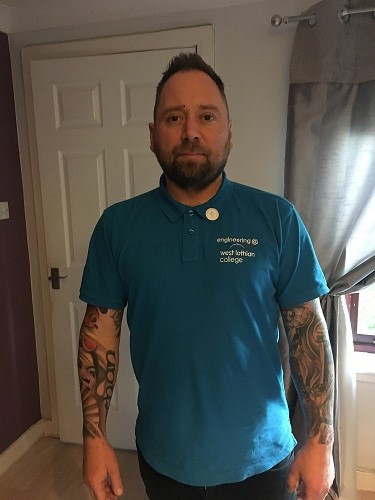 “I came to college to better myself as I felt my previous roles limited my chances of progression. I didn’t do too well at school and, in hindsight, that is something I regret.”

Mark is flourishing on his course, and has applied to do an HNC in Engineering Systems when he completes it. While he is looking to enhance his chances of employment within the engineering sector, he has become somewhat of a mentor to his younger classmates.

“I do try to be a role model to the younger students in the class, and I help them when I can. Hopefully, when I have gained some industry experience, I will be able to teach engineering as a way of giving something back.”

Mark has also organised visits from local primary schools to the engineering department. This introduces children to engineering and other STEM subjects (science, technology and maths) at an early age, and helps shapes their future subject choices. The visits were so successful that they were reported in the local and national press which led to his hard work being recognised in the Scottish Parliament.

Mark has since become a STEM ambassador for the college, and is an integral part of the STEM club which is working with local businesses to build a rocket car in the hope of breaking the Scottish land-speed record. Mark is project manager for the rocket car build, as well as balancing studying during the day with working every weekday evening.

Click here to find out more and apply for this course