For Andrew Campbelton, the journey back into education has been fuelled by a desire to professionally develop in a subject area very close to him. 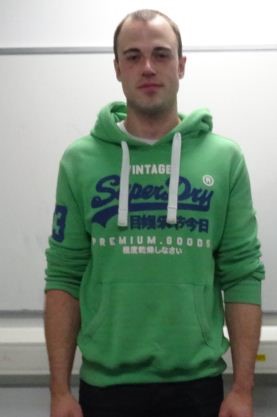 The course is run in conjunction with the Scottish Widening Access Programme (SWAP). SWAP supports access to higher education for mature students at colleges across Scotland and is a proven route into hundreds of degree courses at partner universities.

Andrew saw the course as a way to evolve professionally, a notion he admits that was verging on the impossible in previous roles:

“I had several jobs within warehousing and the financial sector after leaving school and while it would be a little harsh to describe them as dead end jobs, they offered no progression route to me. I wanted to push myself, I didn’t want to be in a comfort zone just plodding along and I knew I had much more to offer.”

Andrew knew a care based course was something he wanted to pursue after helping a family member previously:

“My aunt has Multiple Sclerosis and I spent some time looking after her. I was amazed at how I could genuinely brighten up someone’s day and make them feel a bit better. That immediately gave me more job satisfaction that I had ever experienced in my other roles.”

Andrew knew the road ahead would involve pushing himself out of his comfort zone to achieve the best results, and he excelled.

“I went into the course with a really open mind and if I’m being honest, the assessment writing was something I struggled with a little in the beginning but I grew in confidence as the course progressed because you get results as you go along and seeing I was doing well was a real confidence booster. I managed to achieve straight A’s so the hard work definitely paid off.

Looking back though I have to say my favourite part of the course was presentations. I started the course as someone who hated public speaking but giving presentations in class made me realise that they are not something to be scared of and by the end of the year I actually enjoyed them. They have definitely made me more confident.

Being a mature student has benefited me greatly as if I had went into further education straight from school I wouldn’t have the life experience that I do now and that has served me well in my course. I think being that bit older you realise how big a responsibility caring for someone is.”

As he continues his journey by progressing to university where he will study Mental Health Nursing, Andrew looks back fondly on his time at West Lothian College where a huge focus is on trying to eradicate the stigma around men in Care.

“The stigma unfortunately still exists in society but it is something that is definitely changing. I found that I was welcomed with open arms as men are so needed in the industry and despite being in a class which was 80% women I was never made to feel different I was treated exactly the same as everyone else.”

When asked if he had any words of advice for people considering moving into a care related course, Andrew had this to say:

Back to Case Studies