Jordan chose to combine the Foundation Apprenticeship (FA) in Civil Engineering with his school timetable at Lanark Grammar. He didn’t know anything about Civil Engineering until he saw the course advertised and decided to read up on it.

“I chose the FA as I thought it was something different to what I was doing at school. I wasn’t really enjoying school so it seemed a good chance to try something new. When I read up on civil engineering it sounded interesting and definitely like something I might have wanted to do as a career so I thought I would give it a go.”

As someone who expresses that he didn’t always enjoy school, Jordan has enjoyed his course and coming towards the end of his second year and the programme, he has a lot of positive things to say about the course.

“I have enjoyed doing a lot of different subjects. Maths hasn’t been so great for me but I have had loads of support from the lecturers and have stuck in and managed to get through it. We have been on loads of trips which have been really good as I like going out to lots of different sites.”

As part of his programme, Jordan has been on placement with Lovell at one of their building sites.

“I enjoy being on sites and seeing something go from plans to foundations and then by the end to see the finished product come together.”

When asked if he had any advice for anyone wishing to undertake a FA, Jordan had a lot of positive things to say.

“I would highly recommend a FA to anyone. It’s something different and it gives you a taster for college and for the subject before you leave school. It’s been a good course and it really sets you up well for the future.” 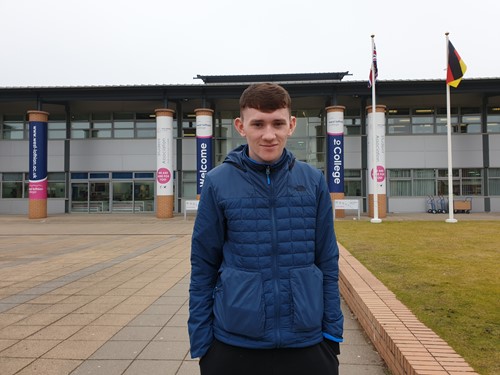