Ben is currently combining the Foundation Apprenticeship (FA) in Social Services (Children & Young People) with his other 5th year subjects at Armadale Academy.

In speaking about his reasons for choosing a Foundation Apprenticeship, Ben spoke of the many benefits of the FA.

“I liked that the course is over two years. You spend the first year learning the theory, for example we have been learning about the development of a child, and then when you go on a placement in second year it gives you a realistic example of the things we have learnt in class.”

When talking of his reasons for choosing Social Services (Children & Young People), Ben was very clear about where he wanted to end up after the course and when he saw the subject on offer, he knew it would help him to get there.

Ben had many positives to share about his time on the programme so far.

“I have really enjoyed getting to know people. At school you are in classes with people you already know but being at college is different, you get to meet new people and it gives you an idea of what it will be like going in to a workplace or in to further study as you won’t always know people. I have also really enjoyed the trips we have been on. We went to a conference in Edinburgh and have been to the five sisters zoo – it is good to learn in a different environment from the school or college.”

Although Ben had a lot of great things to say, he did acknowledge that the work can sometimes be challenging.

“I find writing everything up at the end of each unit really difficult and I am not used to doing that. We get a lot of support though. Our lecturer Heather explains everything to the class and if she sees that we are struggling or need extra help, she always comes and spends time with us to make sure we all get it.”

As careers in children and young people are traditionally more popular among females, we spoke to Ben about whether this impacted his decision to study this course.

“I had volunteered with Children 1st so I had done a lot of work with children and with families and it really gave me confidence that I knew what I wanted to do. I wouldn’t let anyone’s comments or opinions stop me from doing what I wanted to do and I’m glad I chose this course. I feel this is an amazing industry to work in for both guys and for girls.” 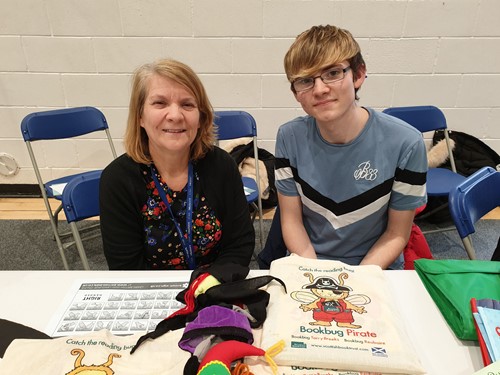 Above: Ben, with his lecturer Heather

Speaking of his achievements so far, Ben’s lecturer Heather Sievewright said: “Since attending college Ben has made many friends. Initially he was very quiet but over the months I have watched his confidence grow and he is an active participant in group activities. Ben is an excellent model for men in childcare and I am sure he will do well im placement next year.”

When asked what final advice he had for others considering combining a FA with their other school subjects, Ben had some final words of encouragement.